I ran in the Old Pueblo 50 Ultramarathon this last weekend. It was an experience. This post will take some time to write so I am not sure when it will finally get posted. There are pictures and a long story to go with it all. I am just organizing my thoughts around this whole thing and will get it all written down, it will just take a little time.
I was ready for this race. I trained and I felt great. I had the gear and the nutrition. I was primed and ready to knock this out and make this race my bitch. The weather was going to be cool with a high in the 60s with a chance of rain. Ideal running conditions. A large part of this run was in rocky terrain which I have done before so was not really an issue. The only issue was finances. I have not been working for awhile so the cost was a major issue. I as contemplating cancelling but for some reason, I did not.
I was excited and looking forward to the challenge. My friend and I left Friday afternoon headed toward Tucson. We had to pick up race packets by 6 and we made it with time enough to make it to the hotel and a dinner his team RaceLab, was having that night. I have met and trained with some members of the team before and we had a nice dinner. There was some advice given which boiled down to: enjoy the run and trust your training. We got to bed about 9-3:30.

I slept a few hours that night but when 4 am rolled around, I was awake and felt quite rested. Even so, I felt off. Something did not feel right. I did not put too much into it and got ready. We followed other team members to the start/finish location at Kentucky Camp where we dropped off our drop bags and got ready to go. We had five locations where we could have our own supplies for nutrition and clothing. Miles 7/29, 25, 33, and 40 were drop bag locations and there were aid stations every 3-5 miles through the course as well. I had nutrition and Heed-filled water bottles in each bag. The first drop would be where we were to leave our headlamps and warm gear. This was a good place because we could also pick any of it up again because it was the same station at mile 29. We had to have a change of shoes at mile 40 (and possibly mile 33) because there is a river crossing after the mile 33 drop. I actually put shoes, a hat, a shirt, shorts, socks, and EFS in each drops as well. My mile 40 bag also had warm weather clothing and another headlamp.
This would have all worked out well but for the weather. At the start, we had 20-30 mile/hour winds. This was not so bad but I think this contributed to my own problems as the race went on. I was a little fatigued as we went on but this is not abnormal. The altitude as well as the fact that it was 4 in the morning. We also stated with a fair amount of uphill which is difficult when you are just warming up. I think I would have been fine but I still felt odd. 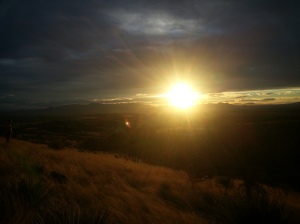 At mile 1.5 a first happened for me, my bib came off. It is not like it was not secured. I had it pinned to my fanny pack and it tore off through the pins. Weird. Would have been more of a problem in a bigger race but, with only 144 people running, I just had to tell the stations my number and we were good. Uphill for several miles really was taxing for me. I was not tired nor fatigued, I was affected by the altitude but I think it was also the wind. When we went downhill, the wind had stopped, and it was effortless for me. We made it through the 3 mile station and went on to the 7 mile station. I felt good but it was going to be our first long trip without a station. It was only 6 miles but my weird feelings did not cease. My friend was keeping a steady pace and I was keeping up with him. Somewhere around mile 10, I started to realize I might not be able to make the cutoff time to reach mile 25. I was making progress but it was not fast enough. I decided to let him go ahead and try to make it without me. I did not want him to miss finishing the race because of me. I started to take my pulse so I could gauge what was going on with me. My pulse was running at about 90% of max and that was too high. At the mile 13 aid station, I sat for a bit and I told him to go ahead so he could finish the race. I continued on with the hope that I could find a way to make it to mile 25 before the cutoff time. I started walking more on the uphills and a little on the flats so I could recover and my HR came down and my pace picked up a bit. This next section was thorough a lot of rocky, mountainous terrain but I navigated it, albeit slowly.

I should note here that right before mile 13 we started to notice missing markers and almost got lost. After we left mile 13, we started to have a lot of problems. As I mentioned, this part of the course is through the mountain and there are a lot of trails passing through the area. We had to guess and rely on our maps to find our way through. My friend and a few others who were lost eventually left me behind at about mile 15. Right around now is when the rain started. It was cloudy the whole day but we did not expect that it would rain for the rest of the race. Literally, it rained from about 11 am until 9 pm (the final race cutoff time). I had to go slow from about mile 15 to 19 because I had no trail markers to follow and I played tracker at times to figure out which direction to go. (There were several events going on in the area that day and, apparently, the horse riders pull down the ribbons maliciously.)
There is a beautiful canyon I had to go through just before heading to mile 19.

Beautiful, unless you have to run down it because the thing is all rocks. That played havoc with my toes but I made it fine. I arrived at station 19 with 25 minutes to get to mile 25. 6 miles in 25 minutes was not going to happen. I dropped out and waited for someone to drive me back to the start. It was at this point that I realized that I was without transportation or dry clothing. It is one thing to be running and know you are going to be wet, tired, and cold. It is something else entirely when you are going to have to stand around for 7 hours waiting for warm, dry clothing. I asked the person driving me if we could stop and get my bag at station 25 since I had dry clothing in there. I was wrong. I did not put anything but the shirt, shorts, socks, and shoes in there. I did not even have another base layer in there. It would not have mattered because they left our bags sitting out and they were all drenched by the time I got there. I was still contemplating the issue of no transportation as we drove. turned out that the path we took was a road, the same road the runners were on. I was hoping we might run across my friend and I could get his keys. I saw him running between mile 25 and 29 and offered him some of my supplies and some dry gloves got his keys, and we left. I think we got back to Kentucky Camp around 2-2:30. I did not go into the camp because I was freezing, so I went back to the hotel. I took a shower and got a little food. I rested a bit and planned on returning by about 5. I got back to the camp at about 4:30 (I was going to go get pizza before I returned but I forgot). I am glad I did not delay my return much longer because things were afoot…

Most awesome blogs in existence

The Incredible Adventures of...

a diary of a mom
Josh Terwoord

A teacher's reflections on preparing teens for life

Running With A Purpose

A blog of science and silliness.

If you wear your heart on your sleeve, join the club.

Life As I Know It

Just a girl on a journey to fit

Where Fit Happens
Nutty for Life

A Twenty-Something's Thoughts About Healthy Living and Peanut Butter